I love travelling.  There is something refreshing by default about setting out to explore a new country or even a city just a few hours away. Travelling is a luxury; it costs time and money both of which are in short supply when you are a budgeting university student. But where there’s a will there’s away and I simply had to squeeze in a short break before Life becomes too serious this semester.

I have to admit most of the credit goes to a dear friend of mine who proposed an impromptu trip to Estonia.  One of the top searches on Google regarding Estonia is genuinely, “Is Estonia a real country?”.  That wasn’t far off from I my own sentiments really.  I knew little of where it was on a map and even less about the place. Between work and placements, I didn’t have much time to do more research, and so Anya, Erin and I set off with no expectations of what it would be like. Which turns out, is the very best way to travel. 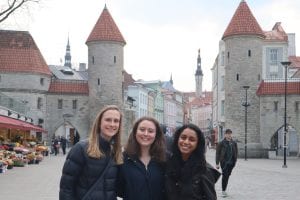 We took a ridiculously early flight to maximise the day (also read as the cheapest flight available) and landed in Tallinn, the capital of Estonia. It was beautiful. Leaving a rather cold and grey Edinburgh and landing in the sun was a fantastic start. We wandered around the Old Town which looked rather like a Hollywood set for Merlin or the likes of.  Pastel coloured buildings, which I have a penchant for obviously.  Towers with turrets and cobblestone roads everywhere made me feel like we had stepped back in time. If you wandered a little further out there was a more industrial side to Tallinn, including its very own ‘hipster’ district – overpriced coffee beans and eclectic pieces of art as you would expect. Like most European cities there was a collection of beautiful churches which we visited and gratefully took shelter in when the weather wasn’t ideal. 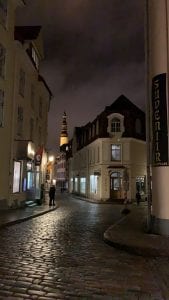 On one of the days we took a ferry – looked more like a cruise liner – across the Baltic to Helsinki, Finland. Which meant I could use my clever pun as the tittle for this blog post, I hope you appreciated. I’m not going to lie the weather wasn’t nearly as kind, but we made the most of it, walking a grand total of 26km through the day. Helsinki appeared to be a much larger city with an abundance of things to do and see.  We stopped at a few monuments, churches and explored the shopping district and university (the trick is to look like you belong).  Would highly recommend.

We may have come home a little more exhausted than when we left but let’s face it if you sign up for early morning starts on a 4-day holiday, we’re clearly just those kinds of people.

Until next time.  x 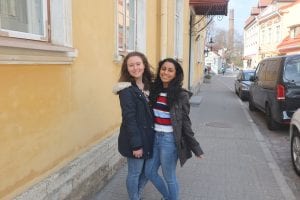