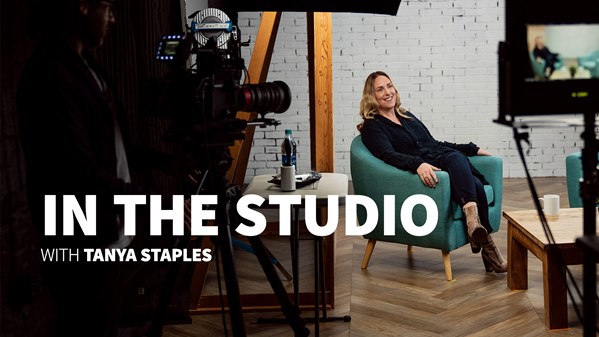 (upbeat music) (music) – Hi friends and welcome to In The Studio This Week. I am excited to have Gemma Leigh Roberts here with me today. And Gemma, you are here recording a course on on building resilience as a leader. Building Resilience as a Leader. – Yes, I am. – So let’s talk about what does that mean? What does it mean to be resilient as a leader and why is that an important characteristic right now? – What it really means is as a leader being able to deal with the unique challenges that are thrown your way, but also being able to learn from experiences and understand what your potential is, what you need to do to grow and to really thrive at work.

So one end of the scale, it’s about coping with challenges, dealing with change, which there’s more and more of in today’s world of work. in today’s world of work. – Change is the only constant. – So they say. And on the other end of the scale, it’s about thriving, learning from experience, developing this growth mindset concept as well. So the whole thing really is about you can move up and down this scale as a leader, and down the scale as a leader, but it’s really important that you learn to master what resilience means and those skills that make up resilience as well.

– Makes sense. And so how do I as a leader go about building resilience? What are the things I need to add to my toolbox to build that resilience? – Okay, so let me tell you some quick tips. Things to think about are think about your perspective, so how you look at situations. So, how you look at situations, Do you see problems as puzzles that can be pieced together and fixed? So a lot of it is about how you view situations and then how you use that thinking to change your behavior or change how you interact with people.

– That makes total sense. – And that’s so easy to embed in the culture and get everyone doing the same thing. – Makes sense. Well, thank you so much for joining me. It’s been a great conversation. – Brilliant, thank you. (modern techno music) (upbeat music)